From the above ROM swapping tests above I had the impression the lower ROM was faulty so today I installed a Universal programmer I bought a few months ago to test the chips. After jumping through hoops on Windows 10 I managed to get it working but I searched the data base for the ROM type and couldn't find the 23256 or 23128 numbers. I assumed they are OTP types so I used the 27256 type that is not an OTP but should be pin compatible. The lower ROM shows gives pin faults on the five pins 15 to 19 and the upper ROM passes the pin test but I can't read either of the ROMs. The pin fault stops the 23256 from being read and the read chip ID prevents the 23128. I might be doing something stupid with the type selection but I think the chips have the same pins and the five that give a pin error are the lower five of the data bus that is the same on both chips so it does look like the 23256 is faulty. It is annoying that I can't read the 23128 chip either for a different reason that I can't fathom. Of course it might that I just don't know how to work the programmer yet and I am doing something stupid.

If you know a chip is pin and programming voltage compatible with another one, my MiniPro programmer allows to skip the "read chip ID" step (There's an unremarkable check box somewhere). I typically need to uncheck that one to make it work with Flash EPROMs that I can't get programmed otherwise.
Maybe your software has something similar.

The flash tick box is on the read page and I tried both settings but no difference. According to the pinouts here
http://mhv.bplaced.de/cbmroms/23256.htm
the 23 is the same as the 27 for reading since the 23 has unconnected pins on some not different ones but I don't know about pin readings the programmer would be expecting.

The fact that one consistently gives five data lines as pin errors implies it might be damaged.
Can I use a 27256 window eprom that has 200nS read time or do I need a faster type?

I found 100nS Eproms but it seems everything on the QL was designed to slow the processor down by freezing it until data is ready. I suppose it was due to the lack of technology and peripherals not able to keep up with the processor that was ahead of its time.

I received my 27C256 EPROMs from China and burned JS ROM in to them that was a bit tricky because the image is 64K but the programmer only loads the lower 32K since that is what fits in the selected chip.

The programmer is new so I don't know the best way to do things. I selected a 64K chip then mouse selected the top 32K and copied it to clipboard. Then I selected the 32K chip and pasted the clipboard that seemed to work because the chip contents looked right.

Unfortunately I forgot to label them but I tried them in both orientations and the computer still doesn't work. The display is different and cycles around different clear pictures of blocks showing the processor is running but the program is random.
Have I done something stupid by burning a JS ROM where a JM ROM was originally fitted or do they both work in the same machine version?
If ROM version isn't the problem then the data bus looks like the problem since it was four data pins on the original ROM that the programmer thought were duff.
The data buffer goes directly to the processor and the 74LS257 that I just checked to see if it was in a socket. When I touched it to see if it was hot all sorts of things kicked off. The micro drive whizzed off and there was clicking unfortunately I didn't have the display on so don't know if anything happened there.

It turns out the sensitive part was the 15 MHz crystal next to the chip that I touched accidentally. The can should not be that sensitive to touch so it needs a closer look.
What happens if the 8302 clock gets screwed up could it put two things on the data bus at the same time and the ROM came off worse?

Did you put the eprom(s) in an adapter board?

As the QL ROM is not the same pin out as an EPROM.

No I didn't because I thought pin 22 OE was tied but taking another look at the schematic the resistors and dotted lines don't seem to go to a definite rail.

Do I have to pull the pin of the EPROM out and tie it to a rail? Oh! pin is Vpp I will have to check what to do with that too. 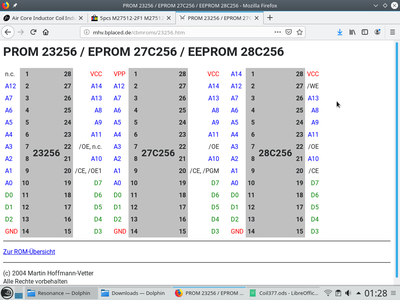 I think there are a couple lines to invert, check this message thread:

Hi Derek
My EPROMs are only 32K and I have read the data sheet that says nothing about connecting the Vpp line other than applying over 12V during programming so being at 5V is OK I think. It is just the OE on pin 22 that has to be tied to the CE on pin 20 so the chip gets enabled with one line like the original PROMs.

I've seen circuits that say to pin them to 5v and some say leave floating when they are being used as a ROM. What model number are they?, as it will sometimes say on the datasheet

Return to “The Welcome Area”