Since there are no entries this month... here is a little program I wrote to show my little grandson how computer games work....

LRUN and watch while the #1 window draws circles which you have to fire at. In #2, you can see the shifting array of data, where .5 indicates a hit.

Then use arrow-keys to keep the cross-wires moving, but on-screen. Bubbles may wrap off edges onto the opposite sides !

Fire with the space-key to burst bubbles, #0 showing the lapsed time. When all burst, RUN again to try to improve time taken, and that's it...

The code is partly bilingual, to show how basic can be translated for foreign language users.... after half an hour explaining, my grandson understood it all !

For educational purposes of course, with demonstration of the use of the three channels, letting him try some direct command changes etc.

There were entries, just none for the QL, and none for any machine in week 30.

That's an interesting program you have there - and given that it's a game of sorts, can I consider it a competition entry? It certainly fits the remit, even if I've already found it only works with QPC2 and not QemuLator. That's not much of a problem now, seeing as I can always include QPC2 instructions for noobs.

Also, I will drop you a PM, so watch out for that.

Here is a modified version which should run OK on Qemulator and 128ko QLs, (I hope, not having the platform to test on...)

I have not used LOCals, so as there are too many for older systems. The program should start after typing WMON, or on simpler setups do a RESET.

Please PM me if there are any further quirks...

One entry this week - and you can all see it above in this thread. I'm only now getting round to posting the review because the game is so very basic that it took several evenings to find the right words. Of all of Steve Poole's three CSSCGC entries this year, I see this one as being the closest equivalent of a ZX81-style game on the QL, in that everything is kept completely standard (including all the window sizes and positions) with the specific intention of making the code as easy as possible to examine, vary, and improve.

Behind the scenes it's been officially named Adrien's Bubble Burster - as stated above, Adrien is Steve's grandson, and though I don't know how old he is, the implication is "not very" (probably one digit - am I right?). And I've stressed in other parts of the Sinclair world that are less familiar with the QL that, if Adrien understood how the code worked within half an hour (that wasn't an exaggeration, was it, Steve?), then anyone can do the same! 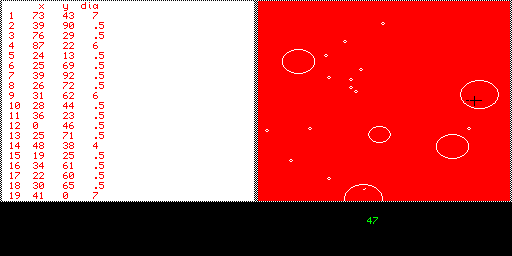 I am slowly learning to program using compiled BASIC on SMSQE and so I downloaded Adrien's Bubble Burster, described
as a program anyone can understand in half an hour.
The program failed to run in my setup and interpreted programs do not sit well in my windowing environment so I thought I would modify it to execute in a window and look more like a game.
I have to say that in half an hour I could not understand the code well enough to enable the program to fill the window but I quite like the partial fill result and for those that like SMSQE, I post a screen print and a copy of the modified code. I was unable to add
code to quit the program without finishing the game, so I use Rjob to kill it 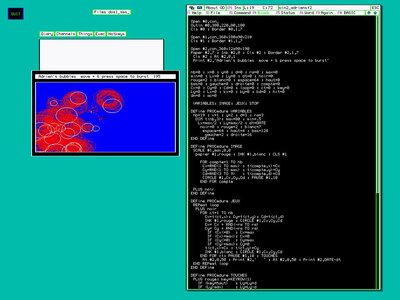 Learn the rudiments of games programming in half an hour ? No exaggeration ! My grandson sat beside me and we went through the description of the workings of the three QL channels : #0 Direct commands and how to translate them using procedures ; #2 EDITing window to define procedures ; #1 program window to draw the animated output; Re-use of #2 to list the shifting contents of the screen coordinates in an array. I do not pretend that an 11 year old would be able to start programming without someone sat with them to explain what is described in detail in the Beginner's manual.... (I wrote the program in about an hour).
As for the program : We went through the listing to show what each statement did, and at the end he replied correctly to my questions, and could experiment direct commands such as PAPER 4: CLS , PLUS rouge: CLS etc. He could also predict what would happen as I modified certain code statements.
That is not to say he could program himself immediately : On a visit from his Caribean home, we had but half an hour to explain to him how computer games work ! But at least he now understands the main principles, which should help him if he launches say in PYTHON, ( not a simple code-based language, as it uses icons...)

Hi Tiny, The game was not tested for compilers, but I cannot see why, say TURBO, would fail to compile it, if you zap the CLEAR... What setup are you using ?
Regards,
Steve.

The program compiles perfectly well under TURBO, as long as you delete the CLEAR statement.

The EXECuted compiled program STOPs when all the bubbles are burst....

Hope this clears up any problems on your system.

When I posted "the program failed to run", I meant it failed to LRUN in the SMSQE interpreter.

My setup comes from the ST version SMS2 which did not have a BASIC interpreter but was supplied with a BASIC parser that allowed programs to be compiled or compiled and executed directly from QD.

This provided a development environment in which one could edit the source code whilst the program was executing as shown in my screenshot.This is not the same as the SBAS/QD thing where the program runs as a daughter job of QD. QD then freezes and no executable file is produced.

People are learning to program almost exactly as I'd intended. Obviously, I was hoping that some of those who'd only ever tackled the Spectrum (or ZX81/80...) would have a crack at the QL and realise it's not as daunting as it might look. I reckon it's going to be a fine preparation for tackling NextBASIC, which I'll be looking into much more, all too soon...

As I've just had another "posted on the forum rather than emailed to me" entry, this time on Sinclair ZX World, I will update the page for Adrien's Bubble Burster with a link to Tiny's post which at least goes to prove that there is educational value to be had.

Roll of the dice, take a spin on the wheel. The Angel and the Gambler regularly tops (or bottoms) the polls for Iron Maiden's Worst Mistake Ever (because any band that's been going as long as they have will always have some clangers). I don't think it's all that horrific, but it does clearly have problems that could, and should, have been fixed. And so is the case with Rob Edwards' latest gambling-related CSSCGC entry, Lottery, for the 48K Spectrum - which uses scratchcards instead of roulette. It's the only one to have been submitted this week, but a week with one game that gets a demerit point is still better than a week with nothing! Technically, this has been a week with no submissions, mainly because Google yet again threw Rob's message into the Spam folder - it should really have been part of last week's round-up - but that problem has been permanently sorted.

AN IMPORTANT ANNOUNCEMENT: (well, not quite as important here as it would be on other SInclair forums, but I have to mention it...)

In response to an incredibly inept display of not-even-what-I'd-call-programming that I reviewed a couple of days ago (and which has not been revealed here yet, but will be in the next weekly round-up), I had cause to revisit ZX80 programming, finally getting some machine code to work on it. It has made me rethink the Blue Challenge on this year's competition, in which the idea was to get the unexpanded 1K ZX80 to do... something, in machine code. And by that I meant entirely in machine code - fill up the memory with about 700-and-something bytes and... you've got a rudimentary version of Nim, or Noughts And Crosses, or something similar.

When I came up with the challenge, I was under the impression that machine code programming on the ZX80 was similar to the ZX81, in that the code would be held in a REM statement and executed from there, and it was only after I opened this can of worms on Sinclair ZX World in mid-June that I discovered the truth. (A side-effect of this bout of programming is that I appreciate the QL's POKE_W a lot more than I ever did before, so that I don't have to do the calculation myself to split a number larger than 255 into its component bytes.)

Even at this late stage (in that there's three and a half months to go, possibly four if I'm generous in the end (which is much more likely, now that I know I've got a trustworthy host for next year lined up), I am going to revise the Blue Challenge to something that I think is more manageable, but retains the spirit of the original in some way.

BLUE CHALLENGE V2.0 (which shows up green here because the QL doesn't have blue in Mode 4):
Write a game for the ZX80 (anything up to 16K) which uses all eight of the Integral Functions: CHR$, STR$, TL$, PEEK, CODE, RND, USR, ABS.

Given that USR is involved then this will involve machine code, but it can be something as simple as, say... changing decimal into hex or binary. You know, like I just did. And in order to read the hex output from my program, both CHR$ and PEEK have to be used in combination with each other. So that's three functions dealt with already - the other five shouldn't be too much of a problem.


...yes, yes, I know, Z80 machine code and the ZX80 aren't exactly going to be massively relevant when you're all on Motorola processors and a much more powerful machine, but why not try something new, that's actually four years older, for a change? Meanwhile, carry on as you were.