I rescued this from an old microdrive cart in a bundle of QL stuff. I'm going to take a chance and share it here because I'm sure there can be no commercial interest in it (assuming it was ever actually a commercial package), as by default it only allowed the user to select a date up to 1999. The data is old, some of the sats it lists are probably no longer around and I'm sure there are modern more accurate ways of finding out the same info these days.

I know nothing about tracking satellites, but they appear to be amateur radio related satellites. It was written by the late John Branegan in 1985.

Zipped in windows, but it's only a _bas so no problems with headers. 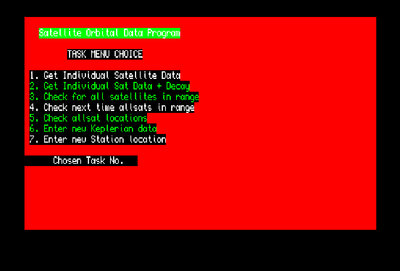 
Collector of original and some new QL related computers, accessories and software even though I don't understand how any of them work.
Original BBQL's: 2x German, 1x UK model (plus quite a bit of other old stuff)
Custom AT cased QL system with Gold Card, Qimi mouse, Hermes and MFM HDD
PC with QXLII card installed
Q68 present, but not setup yet

Other hobbies include writing chick lit on a chiclet.
Top

EVERY SOFTWARE THAT IT SAVED IS GOOD
THANKS VERY MUCH