Dino is a QL version of the classic browser game where you control a little dinosaur running through the desert. Jump over the cactuses - they are fatal if you crash into them.

A horizontally scrolling simple platform game. Written in SuperBASIC, with notes on modifying the program yourself. Can be compiled with Turbo or QLiberator if you wish. Too slow to run on a standard QL, but should run on anything from Gold Card upward as long as it has Toolkit 2, on QDOS or SMSQ/E systems. See the instructions in dino_doc for how to configure the running speed for your system.

Try the Demo Mode where you can see what you're up against first!

3045 quit
Then just EXEC, or whatever, Dino_bas
Thanks, Dilwyn (Sorry, Dilwyn)

Very nice, Dilwyn!
As a side note: I played it on QEmulator and on QPC - and, my god, the speed is so different!
To achieve the same game speed in emulator running at full speed, on the same PC, on QPC slowdown_steps = 50000 and on QEmulator slowdown_steps=5000 !

@Per: thanks, nice to see people are looking at the code. Useful little mod.

@Andrew: Difference not so great between the two emulators on my desktop pc, but quite a difference on my laptop. Don't remember the delay value on QemuLator on my laptop off hand, although it was a higher value than yours.

I wondered if the QL could do sideways scrolling, looks like it can.

The user defined graphics using the second font is what I was trying to do, that would emulate other 8 bit micros by defined characters from Basic. Which would any Spectrum game written basic could be ported to the QL.

I wondered if the QL could do sideways scrolling, looks like it can.

The user defined graphics using the second font is what I was trying to do, that would emulate other 8 bit micros by defined characters from Basic. Which would any Spectrum game written basic could be ported to the QL.

Thanks Derek. You are very welcome to use any of the code if it's of any help to you. I made the "user defined graphics" using my own fonted_obj program and converted the character set to DATA statements using Font2Data. Both programs on my website. Including the font as DATA means the program and font are self-contained. The program doesn't have to know where to look for a font file.

Taking that a little bit further, font information in DATA statements could probably be stored as 8-bit binary information. That way the patterns of 0 and 1 bits would give a degree of visual representation of the character when you look at a listing. It'd be a little slower setting up the font because you'd have to convert binary data to decimal to poke into the allocated memory, but usable. That way you could get away with not using a font editor to create it too.

Just ideas I had on the fly while typing this, none of it tested!

A few tweaks to run in windows #1: rather than #0: with my QPCII emulator
and very engaging to play! 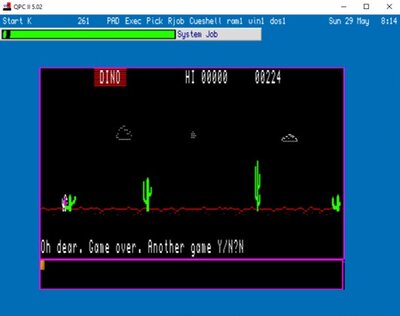 Just got back from a trip to England, and so downloaded the dino game.

Very nice smooth animation, so good potential if you find time to do more to it !

My grandson (12) is with me for two weeks, so I will go through the code with him.... as he is an games enthusiast.

Users browsing this forum: No registered users and 8 guests