Help with Composite out

SCART (under a different name) is a product of the French. They passed a law requiring this type of connector to be fitted to all consumer TV/video equipment.

It then became popular across Europe. But it has never been popular in the USA. As far as I am aware, nearly all TVs sold in the USA do not have a SCART connector.

SCART cables that use the CVBS signal to fool a TV into switching to RGB mode is a hack, that sometimes works and sometimes does not work.

As SCART is not a ‘thing’ in the USA, it’s unlikely a +5V feed was added to the RGB/Video connector for this purpose. The Amstrad made ZX Spectrum +2, +2A, +2B, +3 provide a +12V line (but crippled it by putting a 1kΩ resistor in series with it, which limits the available current to a level that is far too low). The Sinclair made ZX Spectrum 128 did NOT provide either a +5V or a +12V output.

How a LCD TV works is significantly different to how a CRT TV works. All LCD TVs use high speed analogue to digital converters for all analogue inputs (for the RF, it goes through a demodulator first), including RF, CVBS (composite video), component, RGB and VGA. The output of the sampled signal (from the ADC) is then stored in memory. One complete frame. The digital processing system then tries to work out what it has got. Then it converts the data into a form suitable to feed to the LCD.

The video signals from many 1980s computers were only ever designed to be suitable for the CRT technology of the day. CRT TVs and monitor’s are VERY forgiving. Most will display any old crappy signal as long as they can extract the synchronisation signals.

Hence the video output from the QL is just about good enough to produce a reasonable picture on a CRT TV. It comes nowhere near the TV broadcast standard (this cutting corners is typical of most 1980s computers).

This includes cutting corners in the composite colour encoding circuitry, hence the colour composite picture is not great.
The QL is however different from all of its fellow 1980s computers, it starts sending video picture data (pixel data) before it is supposed to (in an area that of the signal that is supposed to be at ‘black level’ and which is not supposed to be displayed). It then does it again on the other (right hand) side of the screen! This is why in monitor mode, you can’t see the left hand and right hand picture information. In TV mode, the OS just keeps those areas ‘black’. This is purely done in software. There is no separate hardware for the different modes.

Some LCD widescreen sets can show the full QL screen in monitor mode, either via an analogue input or from a SCART to HMDI converter (some of the higher priced types, not the cheap rubbish). But it’s rather hit and miss to get a TV and a SCART to HMDI converter where you can get this to work. And no, you can’t tell from the specifications, adverts or trading site listings.

QL, Falcon, Atari 520STFM, Atari 1040STE, more PC's than I care to count and an assortment of 8 bit micros (Sinclair and Acorn)(nearly forgot the Psion's)
Top

Some TVs (not many these days) have a user control to select which input system to use on the first (if more than one) or only SCART input. Most automatically switch input mode depending on the input signals on SCART pins 8 an 16. If the signal line voltages are out of specification, you will end up with either a mess on screen or no picture at all.

As I said in my post above, I think that is very unlikely.

As upscalers don’t normally have user controls for selecting the input mode, yes, the control inputs on SCART pins 8 and 16 are normally needed if the upscaler is capable of both RGB and composite.

A note about video systems:
The U.K. TV system is known as ITU “system I” (I being the uppercase letter i), this is a 625 line, 15625 Hz line rate, 50 Hz field rate (25 frames a second) video standard. This is for a monochrome video signal. To add colour, a colour encoding system adds colour information. This can be PAL or the NTSC colour system. Most countries that used 625 line systems chose PAL. Hence in the U.K. to fully identify it, use PAL-I.

The French went for SECAM for their colour system.

QL, Falcon, Atari 520STFM, Atari 1040STE, more PC's than I care to count and an assortment of 8 bit micros (Sinclair and Acorn)(nearly forgot the Psion's)
Top

Thanks or the detailed description of video signals. I presently have a broken SCART to HDMI converter: those square boxes that seem to be what everyone else has which I got from an Amazon seller (they luckily refunded me my money). I don't think there's a way to fix it but haven't looked closely at the board (though I do have it open). It's all surface mount so not going to be lose solder joints. Likely one of the two chips blew which makes it a paper weight.

Still a mystery why the US RGB connector has a 5v signal on the UK's PAL line. Not sure how it was useful in the US market.

So I had a weird occurrence with my color composite out on the QL. Basically my picture was jittering vertically. I googled it and got to here:

So it seems more modern equipment cheats a bit causing older video output to sometimes have issues. The article above talks about horizontal jitter but either way should be caused by the same thing.

I have both a Toshiba 19" LCD TV that was giving me horizontal jitter and a KWorld digital tuner USB stick w/composite support running under Windows 7 that was giving me vertical jitter with the QL color composite output (note the monochrome output worked perfectly on anything tried). The other TV's I tried this on worked without issue: a Toshiba 21" flat CRT TV/DVD/VCR combo, a 15" Supersonic LCD TV, and another 15" Toshiba LCD TV/DVD combo.

I did as the article suggested and used an upscaler and downscaler to create a stable composite signal. Not sure if the image degrades a bit since the jitter made it bad but I don't think too much. The picture below shows the two scalers I used -- note that I was testing them last year at school to see if I could take an HDMI signal, convert it to composite and transmit it via X10 over the air to an X10 receiver and convert it back to HDMI, which worked (though the HDMI signal obviously degraded). So I used the same two scalers this time and reversed them, Composite-to-HDMI-to-Composite, to get it to work 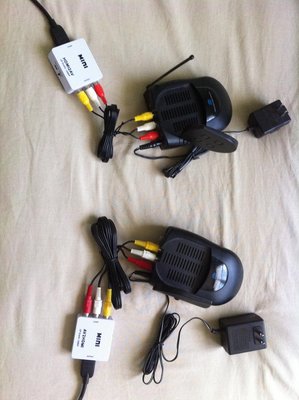 One question on a different note. As I was investigating the issue with my QL's color composite (I had mod'ed it to grab the signal off of the MC1377 pin 9) I looked at a bunch of Speccy videos on composite mod and some put a capacitor into the signal to "decouple" it. One person claimed it really would only preserver the output signal (i.e. TV) form voltage spikes but others claimed it could improve the signal. No other circuitry was added, the 100 uF capacitor was just put inline negative-to-postie in the composite signal. Anyone done this? I can obviously try this without opening the QL up.

Further update...the jitter was caused by me running the wire off of pin 9 from the MC1377 by the left-most microdrive. If I grabbed the signal elsewhere the jitter went away. In fact, I now am grabbing it right from the input of the RF modulator which is much more convenient to grab than running a 6" wire from under the board to it (that is were the switch is mounted). Plus I no longer need the extra resistor to improve color. But yet again, an example of the noise microdrives add.

On an odd note, the reason I found the sync jitter was because I was plugging into a USB TV stick with composite and that stick was experiencing the vertical sync jitter (now fixed). However, I also have a Toshiba TV/Monitor and recently plugged my QL into it and get an even weirder problem. I have used that TV/Monitor and a ZX81 and after the RAM pack warms up (too much) the top part of the screen (about 3 lines worth) starts moving sideways and back (this is in RF mode). So the same behavior happens immediately on the QL's composite output. The TV/Monitor gives a normal signal to other composite in (I have one of those ATARI joystick games) and the digital TV and VGA signals are crisp (i.e. it's a nice TV and the quality I expect from Toshiba). So something in both the ZX81 and the QL causes that TV to act weird. They are both made in the 80's but he QL's MC1377 chip ought to be pretty standard, no?

I don't know about in the States. But in the UK, back when Video Cassette Recorders first came out. You sometimes got pulling at the top of the picture, which sounds like what you are describing. It was caused by poor quality sync signals from the VCR's.

Most TV's had a specific channel number ( usually channel 0, or the last available one) for VCR use, Which when selected, would add a correction to the sync circuit to fix the problem.

I don't know if more modern analogue TV's still have this feature, check your manual, or try tuning into one of the above channels to see if it helps.

Users browsing this forum: No registered users and 5 guests