pjw wrote:Some of you will be heartily sick of hearing about my treasure trove experiences. Yet there are some salutary lessons to be learnt which Id like to share. (Fools learn from own experience; the wise learn from the experience of others.)

The 50kg of cables I bragged about were nowhere to be found! Its just possible that some remnants may turn up in boxes of mixed content, but for now Im rather cable-less. Cables and other bits and bobs that were once ubiquitous, are now as scarce as hen's teeth. Where do you find RGB cables these days? Or ACSI to SCSI converters? Even the old TV and D-sub VGA connectors and cables are dying out. Im sure there are specialists who are well stocked with these rare commodities, and will sell them to you for an equally rare price (+ p&p)or they can be had from America or the UK on ebay. But I live in a throw-away nook of civilisation where the best place to find lightly used second hand stuff is at your local rubbish tip. However, the mentioned cables and such like were incinerated years ago, so no chance there. In other words, before packing away old stuff, make sure you include what it takes to fire it up again when you need to!

Also the know-how, incrementally accumulated over many generations of 8 and 16 bit hardware developments is slowly fading from my brain, like the print-outs of that infamous "free" QL serial printer (for which, incidentally, I still appear to have a cable! though the printer was, for obvious reasons, consigned to damnation years hence.) If possible, write down what you take for granted now, to fire the thing up, or practice regularly!

There was some life in one of the old QLs, but the membrane was bust, so I didnt get past the F1/F2 screen, which, without an RGB cable, I of course could not see. I have a couple of spare original membranes, so I might at least try to get a BEEP, once I get round to changing it. The other machine, the ancient one with the battery backed RTC (and, it turns out, QIMI!) had a note-to-self scribbled on it saying "Needs new ULA", which I once must have understood. So no luck with the old QLs so far. A shame, really, as I could not part with my microdrive cartridges (some 60 of them, so far, in 3 Transform boxes plus the odd Sinclair 4-pack pouches) without wiping any personal or client data first. Anyone know of a sure-fire way to do this? With a strong magnet, for example? Luckily I backed up the contents onto floppies a long time ago, but I didnt keep a record of which cartridge contained what information. (The floppies were later backed up onto hard disks and backup CDs and later, DVDs).

I then tried to test the Atari Mega ST4. I couldnt use my ancient Philips multisynch monitor, as I didnt have a cable it liked. However, I have an oldish LCD monitor, also Philips, that understands VGA. QVMA, the graphics card for the Atari, developed by JMS, with drivers by Tony Tebby, also does VGA. At first I couldnt get a display at all. The monitor complained that it didnt like the signal and obstinately reverted to 1680x1024 or whatever. I pressed some keys, willy-nilly, and lo! a squashed image of the GEM desktop appeared. It wasnt readable, but it displayed life, and proved that the machine and its 105Mb SyQuest HDD were intact. On the last try, one of the three compatible mice seemed to work. I clicked on the shortest name ("QL" I presumed) and it opened. I clicked on something that vaguely resembled SMSQE, and would you believe it, it booted into my old, and once favourite, QL environment! (SMSQ/E 2.98) I had to fiddle blind with DISP_SIZE parameters for a while, but finally got a functional display. That machine was bought 25 years ago (+/-)and was in daily (and nightly) use for some 10 years. The past 15 years it has been languishing in its box. I may have had it out once or twice since then, but certainly not since 2007. Still, at the cost of about £100 per annum spread over its lifetime so far, it bloody well ought to work

Tomorrow I hope to test the Q60, and if I can get hold of a PC with an ISA slot, the QXL2/25. Or I may rummage further for those cables..

Regarding the "Italian translation" above, let me just clarify. There are a number of non-English speaking "QL community" members. From some of the messages I got, it was clear that they must be using some translation software. Presumably they also translate English back into German, Italian, French and so on. So what do they (you) get out of what gets written here? I took Google Translate and converted my text from English to Italian, and then took the output and translated it back again to English. Its pretty good! But, there is plenty of nonsense and much scope for misunderstanding! On QL-user there have been a number of ugly fights in the past, much of that, I believe, down to misunderstandings due to language, as well as an ignorance of cultural differences. I merely wanted to demonstrate that, not to make fun of other languages, or of any person for not speaking English!

Can someone identify this for me? 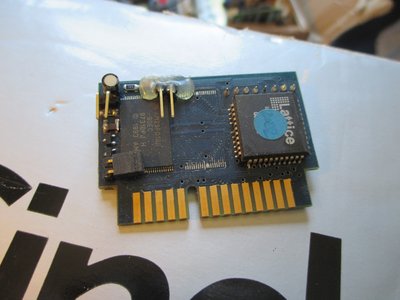 Managed to test the QXL today. Heres a proof-of-life shot of the QXL in SVGA mode: 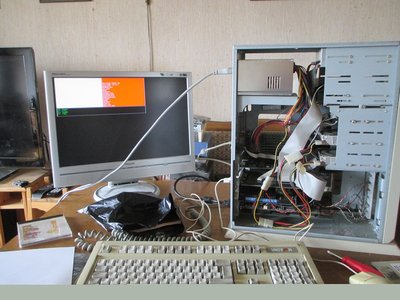 Only did a basic test with the original software, nothing fancy, like testing the mouse (serial mouse has to be setup in MS-DOS first <shudder>) or network. I may want to run a few speed tests for the hell of it. Backed up the original disks. SMSQ 2.72 from Miracle was fine, but SMSQ/E 2.90 (a paid for addition from JMS at the time) got stuck on the SMSQE.EXE file. Oh well, better versions are freely available now.

Thanks, Tobias! I must have been "savy" as you suggest, otherwise I would have got the 8 Mb version..?

I did fire-up my QXL just days ago to verify that the updated QL/E is running well. See the picture series starting at:
https://onedrive.live.com/?cid=C250D874 ... 53&o=OneUp

pjw wrote:Only did a basic test with the original software, nothing fancy, like testing the mouse (serial mouse has to be setup in MS-DOS first <shudder>) or network. I may want to run a few speed tests for the hell of it. Backed up the original disks. SMSQ 2.72 from Miracle was fine, but SMSQ/E 2.90 (a paid for addition from JMS at the time) got stuck on the SMSQE.EXE file. Oh well, better versions are freely available now.

Speed tests are a good idea. Why not download and fire-up QL/E v3.13 and run QTop-Index an implementation of the New PCW Benchmarks (1986). You should be ready in minutes, just a few steps to be climbed:
1. Download QL/E (follow link in message signature)
2. UNZIP QLE.win and SMSQEQXL.EXE and place them on C:\ root of that machine
3. REN QLE.win QXL.WIN (SMSQ/E for QXL does only support static file names)
4. Start SMSQEQXL.EXE
5. Once the BOOT process has been completed just select the TINDEX “button” on bottom of the screen and run it with WIN1_ as test device.
6. Do not forget to report the test results.

Easier said than done. First I need to get DOS to read a CD. Since there doesnt appear to be a driver, I have to find one - the right one of many thousands - on the Web somewhere, and figure out (once again) how to install it, etc, etc. A world of mindless hassle, in other words. Still, Id like to have a go for old times' sake, so maybe in a couple of days..

Still busy digging, sorting, cataloguing and testing, but other things have been going on too, so I havent done as much as Id have liked.

A major problem with testing stuff is that that box of cables I mentioned seems to be missing! I have this strange dream from my last move: "Dad, are these scruffy boxes for the dump?" Dad (ie me, preoccupied with sorting some papers), "Uh-huh".. Poof! and gone are the days when I could connect virtually any piece of computer equipment! The know-how and infrastructure, which took years and £££ to incrementally build up and maintain, are no more!

Can anyone help to identify the following: On my Aurora motherboard, the Minerva ROM seems to sit on a small PCB (see illustration). What is it? 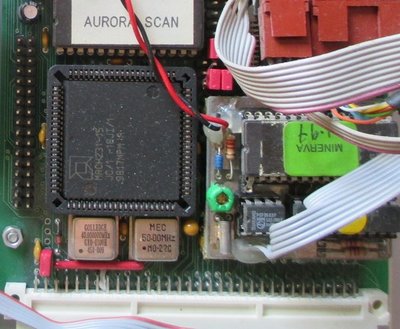 this looks to me like a Minerva MkII - The version that didn't just replace the ROM, but added I²C, a BOOT device that could hold a small amount of SuperBASIC to divert the BOOT process to the network and a working battery back-up for the real-time clock:

Users browsing this forum: No registered users and 4 guests